Although we have not managed to maintain our original aim of being a fully Irish speaking Sea Scout Troop, we continue to encourage the use of the language where possible e.g. for ordinary conversation between Gaelgeoirí, in boating orders, log-books, the use of Suaitheantas na Gaeilge, etc. 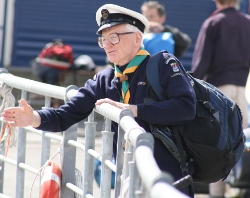 In September 1966, a group of interested parents discussed the opening of an Irish-speaking Sea Scout troop with Eoghan Lavelle, Peter Tobin and Sean Fitzgerald. Within 2 weeks the first seven Scouts assembled and meetings and activities started. Peter and Sean were Watch Leaders (PLs) in the 5th Port of Dublin Sea Scouts (Dollymount).

The troop could not have survived without this help and we remain very grateful to 5th Port for this essential early support. Later, Peter stayed on with the new troop, becoming ASL. The Troop was registered early in 1967 as –

The first Investiture took place in May. The membership was kept at 7 Scouts for the first year and then gradually expanded.

Growing as a Group 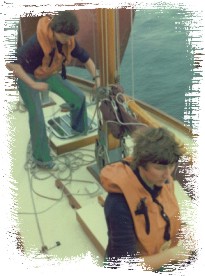 Comharchumann Cualann where the first meeting was held, gave the use of their rooms until late 1968, when a new meeting place was needed. The Dun Laoghaire Motor Yacht Club hosted the troop until 1977, allowing us to use the basement locker room until our own den was available.

A building committee was set up, a plot of land leased from Dun Laoghaire Corporation, planning permission obtained in 1974, and fundraising began. Work was carried out by leaders, parents and professionals, and despite setbacks including winter damage, the troop moved into the Boatstore (ground floor) in 1977. Work on the upper deck was completed the following year. Further improvements and modifications have been made since then. When we became well established in Dunlaoghaire Harbour we changed our title from Baile na Manach (Monkstown) to Cuan Dhunlaoghaire (Dunlaoghaire Harbour). 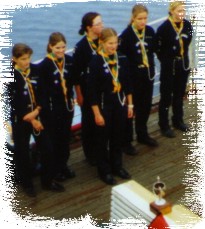 An Irish-speaking Girl Guide Company, Buíonn Eanna, had started in Dunlaoghaire in 1972. Later, the senior Guides wanted to join 8ú Calafort for boating activities. The girls asked one of their school teachers to become their Leader and a Sea Ranger Unit of the Irish Girl Guides was formed in January 1976 and given the name LRM Fódhla. This unit was very active for 17 years and participated in many Group, National and International camps, inland, coastal and offshore cruises, canoeing and mountain expeditions.

In recent years, many applications for membership were received from girls who were too young to join Sea Rangers. The existing Sea Scout troop, boys only, was too big to admit more members and so a new, girls only, troop was formed in 1993, later absorbing the Sea Ranger unit. The girls’ troop is named Buíon Fódhla and the boys’ troop Buíon Manannáin. Each Troop has 6 Watches (Patrols) and averages about 50 members over the past few years. 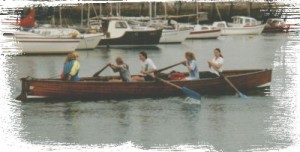 Initially, we relied on borrowed craft for basic rowing and sailing training. Over the years we have gradually built up our fleet of rowing and sailing craft. The first two canoes, touring double kayaks, were built in 1968 from wooden kits (£20 each, the proceeds of Job-week!). In 1971 we aquired an old East Coast Skiff from another Troop and bought a 16 ft Rana sailing dinghy. In 1980 we bought one of the newly designed Sea Scout Standard boats, the BP 18, and in 1982 got a new Skiff, “Sceolaing”.

We acquired two more BP18s and since then have added considerably to the number of boats in the group. Now we have the 3 BPs, 2 Skiffs, 2 Motor Rescue boats, 2 small punts, 5 Topper dinghys and around 10 sea kayaks.